First off, I’d like to thank Jim C. Hines for getting my mind cranking on this topic. His post here echoes my recent glasses shopping experience nearly exactly. (Go ahead and read it. I’ll wait.) While the similarity is a little creepy, it’s really good to know that others are out there having similar experiences.

Instead of taking the gray man approach when the inevitable nerd shaming began as a child, I made an effort to completely change my wardrobe and be “cool”. I remember seeing it as a fun challenge, and so I picked out all kinds of new clothes and got a new haircut. Remember those bright pastels that were out in the late eighties? Remember spike haircuts? My fashion experiment would be described by today’s anthropologists (by which I mean internet denizens) as an epic fail. Whoo boy, there are some school pictures that should be burned, if they haven’t been already.

After that, I abandoned wearing what other kids wanted me to wear (it’d never be right anyway), or what my parents wanted me to wear, and decided to wear what I liked. Lots of dark colors. Black dockers. Black dress shirts with bright ties. Comfortable, oversized shirts. I remember liking B.U.M. Equipment a lot. And when I got my glasses early in Jr. High, I went with half-rim metal frames and huge lenses. I mean, if my vision needed correcting, why would I limit the amount of viewable area corrected? The bigger the lenses, the more of my field of view came into focus.

I was never able to blend into the background, as Jim tried to do. I knew that my physical stature would provide too tempting a target for the taunters and bullies to resist, so I poured every ounce of my clothes-buying power (awww, Mom, can’t I PLEASE put this white shirt back on the rack? They have plenty of black ones over there! C’mon, Mom!) into reflecting who I thought I was. And I took a lot of crap for it.

As the years went on, I wore more and more black. My glasses frames got smaller and smaller, until I eventually tried contacts. A near-miss with an eye infection ruled those out in college. Started wearing trench coats just in time for Columbine to make people afraid of me. I grew my hair long in a skater cut. Shaved it all off, Uncle Fester style.

Then I met Nikki. Tireless, implacable Nikki. She’s gotten me to wear earth tones. Off-white. Respectable coats. My closet has greens and browns and reds and blues in it. I own khakis. I wear shorts when it gets warm. My world has come tumbling down in the past five years. The walls have crumbled before the relentless “How do you know you don’t like it if you haven’t tried it in over 20 years?” And a lot of it, I don’t mind. But to this day, I feel the most like myself when I’m wearing mostly dark colors.

A few months back, we finally made time for appointments with a local optometrist. It was the usual, including the steady slow increase to my nearsightedness, and the ever-present mild astigmatism. When we went looking for frames, we both went with something out of our norm. Nikki picked some very cute frames with some design work on the arms, instead of her usual simple design.

On my last pair of frames, I had deferred to Nikki’s wisdom. My skin had reacted to the metal of the previous frames, so we had picked out a dark brown frame with plastic arms. They were smallish, as I liked them, and the corners around the lenses were rounded. Very nondescript, but not the black or gunmetal that I had purchased in the recent past. This time, like Jim, I wanted something different. They had plenty of styles close to what I usually got, but I wasn’t satisfied. The salesperson suggested a pair of black hipster frames, straight out of the 1960’s military. I tried them on, and was heartily amused when they didn’t look terrible. “You can pull that off.” “Really?” “Definitely.” I looked to Nikki, and she made a face. THE face. I slowly put them back on the rack, making no sudden movements.

I looked around a bit more, trying to find frames designed for large noggins. I found one pair with bowed out arms which seemed to have been designed that way, not mangled into the shape. They were black, and more striking than my usual, but not as crazy as the hipster frames. I slid them on, and they were comfortable. They didn’t squeeze the sides of my head. They didn’t even touch where they weren’t supposed to. I looked in the mirror and… liked what I saw! I turned to Nikki, and while she didn’t make THE face, she was not pleased. They were more pointed than she was used to, she said, and it would just take time to get used to them.

The good news is that she did, and I love these frames. While I echo Jim’s sentiment to all of these that have said “nerd” to me as if it was a bad thing, I send this message to show that despite all of their best efforts, I’m still happiest when I’m just being me. 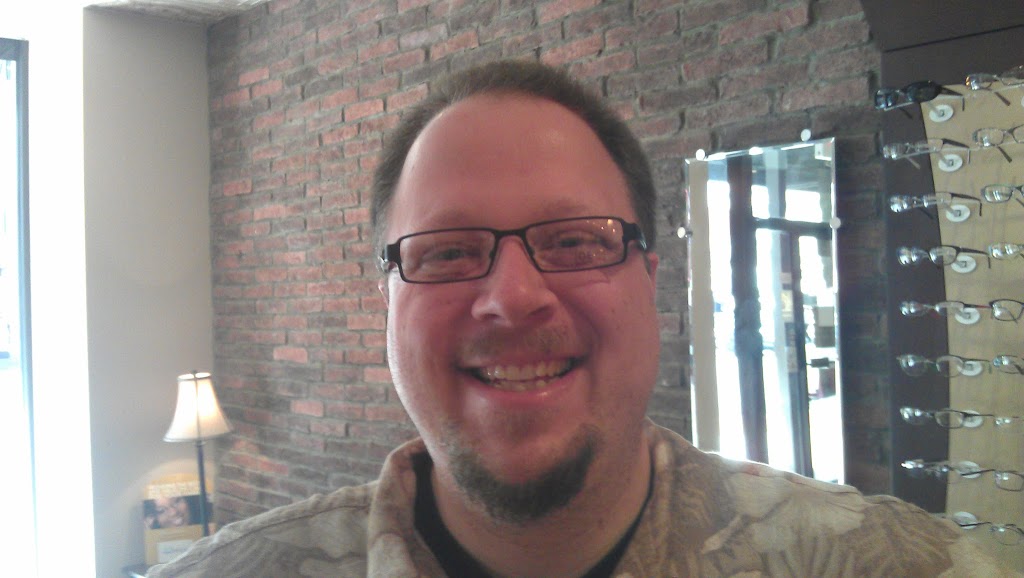 2 thoughts on “On Fashion”