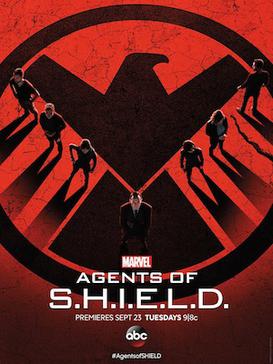 Nikki and I have finally caught up on the second season of Marvel’s Agents of S.H.I.E.L.D. Several of the episodes on our DVR were rendered unwatchable by digital interference, but it was available to stream on Netflix, so we watched it there, instead.

I’m going to do my best to review the season without spoilers. Why? I hate spoilers, that’s why.

If I had to sum this series up in one word, I’d choose tension. It showed up in all kinds of varieties: interpersonal, world-ending, engineered, sexual, and my favorite – inner conflict. Lots of doubt, lots of misleading, a healthy dose of misunderstanding, plenty of preconceptions, and one notable case of overreaction to fear.

Strike that, there’s a lot of overreacting to fear.

The characters hurt each other more than they ever have. I wondered, at times, if there was a team left to save.

If I had to pick a second word, I’d pick triumph. S.H.I.E.L.D. succeeds in so many places where they could have failed, making some major headway. The writers timed it well; just when things were about to get overwhelmingly bad, the characters Got Shit Done.

While this season was missing a lot of the team cohesion that took so achingly long to build in the first season, I give it an unabashed thumbs-up. Now I ahve to wait until late September for season three.

Ah, well. I am happy to comply.