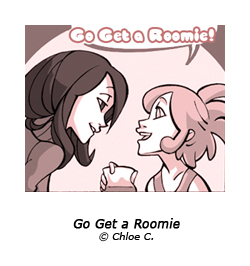 I’m not sure I’ve ever called a comic one of my favorites because of how much I’ve learned. If I haven’t, this’ll be the first time. Go Get a Roomie has earned it.

For those of you that are new to the Skippy, I’ll tell you – I love webcomics. I read a ridiculous number of them daily, and I keep up with updates using RSS.

Roomie is a lesbian that believes, to her core, that love, platonic and physical, should be shared without shame or jealousy. But, as hard as the character tries to convince both her friends and herself, readers are left with doubt. Chlove is a great writer, letting us know that none of the characters are as two dimensional as they initially seem. In fact, every single character is deep and rich and full, and different enough from each other to be easily distinguished.

The webcomic updates several times a week, and is an open-ended just-a-little-NSFW not-quite-slice-of-life story. I highly recommend it.