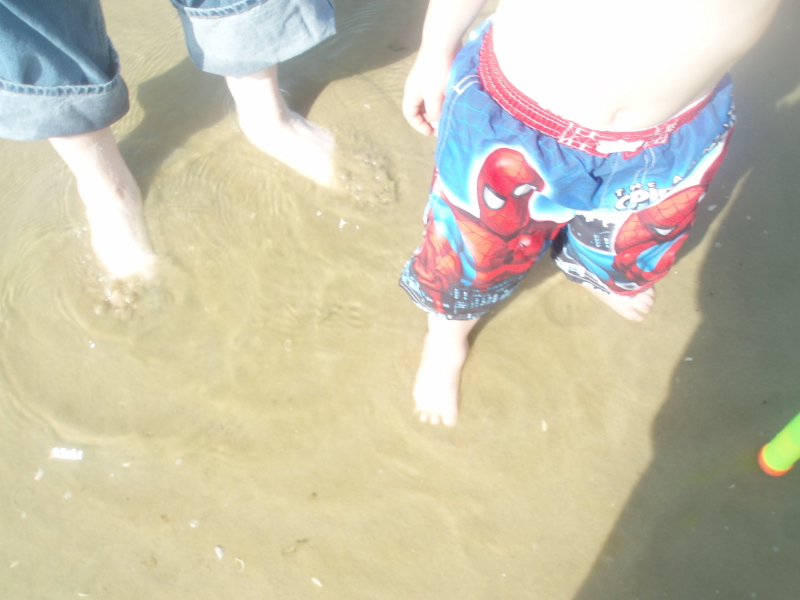 A weekend back, I had an experience that I’ve been longing for, but wasn’t quite sure that I would ever actually enjoy.  But enjoy it I did.  Cue the sitcom music, because we had a mini family vacation and I loved it.

For the second year in a row, my parents rented a house in Caseville, right on Lake Huron, for a week.  Last year, we weren’t able to make it out.  This year, they rented the same house and despite Hunter’s school year extension, we made it a priority to get our butts out there.  I’m pretty sure that if we hadn’t, grandkid withdrawal would have kicked in and things would have gotten ugly.  Needless to say, we made it.

I took a half day off from work on that Friday, and picked Hunter up from school early.  We went and grabbed gas for the Pacifica, and then headed home to meet up with the rest of the family.  They’d been packing and getting ready all morning, so the loading up went fairly smoothly.  We left later than Nikki would have liked, and inevitably forgot some things, but as my Dad said, we were on fluid vacation time.

Google called it a 3-hour trip (Gilligan?), but we made it in about two and a half.  The two youngest kids were out cold minutes after we hit the highway, and I think Hunter zonked out about halfway there.  The trip started to get exciting when we got off of I-75 in Bay City.  That gradual feeling of excitement and squee began to build, and I can’t remember how many years it’s been since I’ve felt that.  We went down Center Ave, OOOHing and AHHHing at the beautiful houses.  We went through Unionville and Sebewaing and Bay Port, home of the Fish Sandwich Festival.  Finally, at long last, we approached Caseville, home of the Cheeseburger Festival.  It took a bit of looking to find the house’s driveway/parking lot, but we found it!  Just in time to zip into a spot at a rate that would have had the minivan rocking on its shocks.  Okay, maybe I shouldn’t be bragging about that, but I was excited!