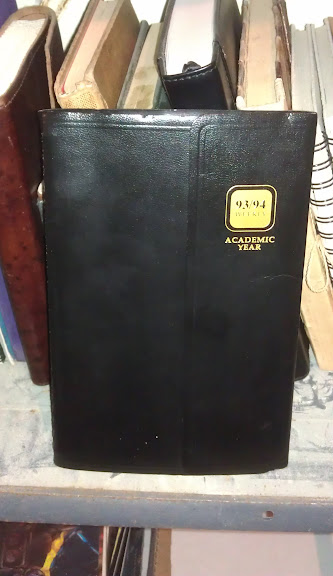 I did it again! Well, technically I did it back in November, but I still did it! Another journal bites the dust!

This one was given to me by my Mom and Dad as a way to record my adventures in Japan when I was sixteen. My school district had a Japanese program that I participated in during my High School years.  We also had a sister school, and I spent a couple of weeks in a host family’s home. I was lucky enough to be able to return the favor the next summer, and show Nobu around Michigan a bit. Anyway, as I tend to do, I spent more time experiencing the trip than I did writing about it. So, when I rediscovered the journal, only a few pages had been filled.

Truth be told, it’s not even really a journal. It’s a planner for the 1993/1994 academic year. It wasn’t tough to modify – I just wrote around the date markers, the entries from my trip, and the various checklists. I made sure to leave some buffer space around my trip journal so that I didn’t ruin my scribbles for posterity.

At first, I’d tried to turn it into a gaming journal. Myst 3: Exile, Myst Online, Eve Online, and Everquest 2. That effort went the way of most of my single-purpose journal efforts, which is to say nowhere. I picked it back up when I’d filled up the last journal, and filled it with quite a bit of Glass Crown, some final Adam’s Name – Detroit edits, and the beginning of the Remembrance rewrite. Looking back, it feels like I stayed incredibly on task through the entire thing.

On to the next! There are stories to be told!

A few nights back, I filled another journal with words. This usually takes anywhere from ten months to two years, depending on the size of the journal and how often I’m writing. They went much faster back when I was writing The Remembrance, but slowed down once I began The Glass Crown. 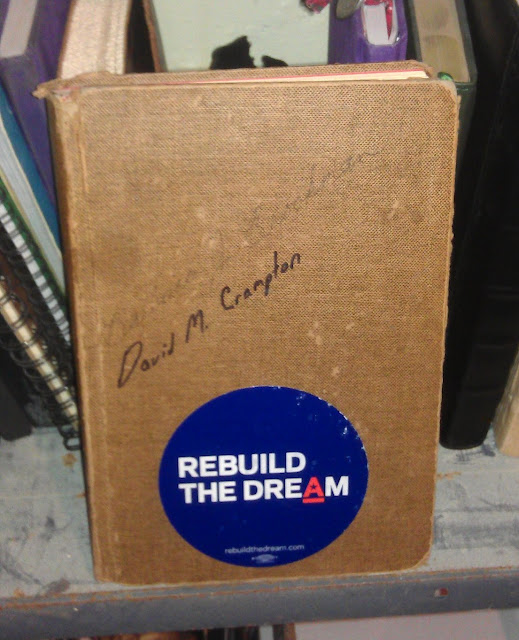 This one took six months to fill, and is the second one to bite the dust since I picked the Adam’s Name story back up. It was a gift from a friend, back when I was writing the first book. He was bummed, if I remember correctly, because I hadn’t gotten to any of the notebooks he’d given me by the time I finished. I assured him that I had plenty more stories that needed out of my head and onto the page. I wasn’t done, not by a long shot.

As time goes on, my desire to collect things is shifting from Transformers and comic books to unique notebooks and journals. The one that I filled last had pages made out of recycled cotton instead of paper. It had a suede cover and a celtic knot button to wrap the closure cord around. I picked it up from a shop at the Holly, MI Renaissance Fair called Under the Mango Tree. I’ve also got two books, gifted to me by my brother if I remember correctly, that are made out of the fibers of elephant dung. (Oh, wow, those guys are making them with lines on the pages now!) A while back, I was gifted one made entirely out of bamboo, from cover and spine to the pages.

When I’m in second hand stores, I have to restrain myself from picking up the ones with yellowed or wavy pages. Or when a favorite webcomic offers branded notebooks. Or when I go to a Ren Fair.

Yeah, I’m in trouble. :) Well, enough blathering. It’s time to fill the next one!