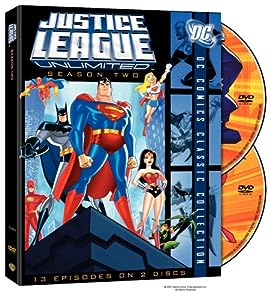 I’ve never been much interested in the Justice League. Superman and Batman didn’t seem like believable teammates (despite their many sightings at an unnamed diner). Hunter raved about the cartoon, though, and even more about Unlimited.

And then there was the crossover with Batman Beyond. What is a nerd to do? I had to at least give it a try. Lo and behold, I am glad that I did.

It didn’t focus on the founding members any more than it needed to, nor did it focus on Metropolis or Gotham City or Central City more than any other place. I think they made more trips to Apokolips than anywhere else, and despite being a relative DC newbie, I wasn’t overly confused by boom tubes or the abundance of deity involvement in the modern world.

The writing was both slick and cohesive, and the animation was pleasing to the eye. The characters went as much beyond two-dimensional as comic book characters can (or, arguably, should), and the development wasn’t limited to the original founders.

And thanks to Wren, I always squee when I hear the voice of Jeffrey Combs.

My only complaint is the show’s cancellation. I should be used to that by now, you’d think.

In any case, it’s available on Netflix. Go watch it!

The Distinctly Essential Dresden Codak Primer by Aaron Diaz
My rating: 4 of 5 stars

This book was everything I’d hoped it to be, and more.

The Ocean at the End of the Lane by Neil Gaiman
My rating: 4 of 5 stars

I’ve never had to set down a book because it was too unsettling.

I had only put it down for a day, and plowed through it after that. The story was disturbing, amazing, and thought-provoking. I don’t know that I’d call it fun, though.

The ending is sad, and left me a little despondent. I’d hoped that this time would be the time that something different happened.

The Absolute Death by Neil Gaiman
My rating: 5 of 5 stars

I didn’t think that it would be possible, but this was better than I remember. If you can get your hands on a copy, read it.

When I was nearing the end of the novel, I remembered that Scalzi was attempting to write in the style of Heinlein when he wrote this. I remembered that he had been congratulated on multiple occasions for achieving that goal. And then I remembered the only Heinlein book I’ve ever read, The Moon Is a Harsh Mistress. I say again, my expectations were silly.

Once I abandoned them, I was able to look back on my reading and notice that I had enjoyed every minute of it. As a self-described grumpy old man, I related to John Perry, and cared about what he was going through as he adapted to his new life and new surroundings. When he got thrown across the mess hall by special forces, I couldn’t stop myself from muttering, “Rut roh, Shaggy.” I now intend to track down the sequels, devour them, and get them signed, in whichever order presents itself.

While I didn’t have any problems putting the book down, I greatly enjoyed the ride.

SPOILER ALERT! Fair warning, there are some spoilers ahead for Tron: Legacy.

A Tron animated series, you say? A story set in the Grid without the limitations of actors interacting with CGI special effects? Where could I obtain such rarified awesomeness for my eyes and ears?

The animation style took a bit of getting used to. Legs and arms are very long, while torsos are compact. Hip movement in the female characters is a bit exaggerated, while the male characters move a little bit like spider man all the time. The style is definitely a nod to Aeon Flux, which is fun and disturbing all at the same time.

The story follows Beck, a mechanic, through Clu’s occupation of his city. We see his chafing and eventual resistance to the subjugation, with the help of a familiar face, Tron. He’s alive, if not well. He tutors Beck, with the goal that he can eventually pass the mantle of Tron on to a more capable, less terminally injured, program.

We know that the uprising cannot succeed, because we have seen the Grid after its failure. This story is told so well that knowing this doesn’t matter. I rooted for Beck and his friends, I got bummed at his failures, and I cared about Argon City and its fate. When they introduced repurposing, and gave the supreme nod to the original movie, I squeed. Tron was going to end up there, at some point, and be turned into Rinzler. I couldn’t wait for them to tear my heartstrings out one by one as it happened. I couldn’t wait to see what it did to Beck, and I was supremely interested in how Beck would eventually fail.

At the moment, I’m not sure I’ll be able to witness that. After the first season, Disney did not order any further episodes. They haven’t officially canceled the series, but they haven’t given the go-ahead for any more work. It’s in limbo in a way that I’ve not seen with a television show before. While I recognize that neither Disney nor the creative team are my bitches, I vehemently want to see more of this series. So I went looking, and I found something.

There’s a crowdfunding campaign to get a second season going.  The goal listed is incorrect, they actually need 15,000 votes for the studio to acknowledge that it might be worth while.  So, seriously, tell your friends. I want to see the story progress, and after watching the first season, you just might feel the same way.

I may lose some geek points for this, but it was the 1990’s X-Men cartoon that really got me into comics. It started me collecting Uncanny X-Men in the Era of Gratuitous Pouches, and I never looked back. From there, I branched into the re-issues of Sandman, the Darkness, the HBO rendition of Spawn, and both the Dreamwave and IDW versions of Transformers. Since then, it’s mostly been a random graphic novel here and there, many of which were borrowed from my local library. That one cartoon opened up worlds to me.

I should think Amy Dallen’s vlog at Geek And Sundry. She said that this cartoon was a gateway to comics for her, and since it was for me as well, I went looking for it. When I saw that Netflix had it available for streaming, it was all  I could do not to cackle and steeple my fingers. The rewatch stirred quite a bit of conflict in me, I’m not ashamed to admit.

The story was much like the story in the comics. Each story arc was meant to be more or less complete, and spanned a seemingly random number of episodes. Also like the comic, and unlike most of the animated television that I’ve watched, the art team changed with many of the story changes. Frame rate varied wildly, as did costume and coloring reliability. I strongly suspect that the episodes were grouped by story arc and then contracted out to different animators and studios. Despite some of the pathetic animation that resulted, I don’t remember being the slightest bit disappointed or frustrated with it as a teen.

My favorite stories were just as awesome as I’d remembered. Apocalypse. Bishop’s timeline shuffling. Apocalypse. Phoenix and Dark Phoenix. Apocalypse. Creed’s outing as the son of a mutant. Did I mention Apocalypse? I should, because he’s my favorite villain of all time.

OMG Mystique wore clothes! How crazy is that! The voice actor for Storm could make the most ridiculous lines sound awesome. Halle Barry didn’t have a chance. And when Wolverine was duking it out with Sabretooth? That dialogue dripped so much testosterone that I almost wanted to watch football and drink a beer. Almost. And, damn it all, the sentinels should have made it into the movies!

This series may not live up to all the praise that I heaped upon it over the years, especially when compared to present-day animated shows, but it’s still a damn good series. In another five or ten years, I’ll probably watch it all over again, and enjoy it just as much.

“I am as far beyond mutants as they are beyond you. I am eternal!” -Apocalypse, speaking to Graydon Creed

“Star Cross’d Destiny is focused around five misfit young adults in New Orleans who are cursed/blessed with supernatural powers.”

You can’t kill this comic. Seriously. Many have tried. It’s been pronounced dead at the scene, at the hospital, in the morgue, been buried, and has clawed its way back up from six feet under. It’s the Jean Gray of webcomics.

The story is just now getting into the the thick of it, and the timing of the most recent resurrection has brought with it a new style of artwork. It may be a little bit on the shiny side, but I’m very happy with it. At this point in the story, the supporting cast are starting to differentiate themselves. The group’s dynamic is shifting out of dysfunction as they confront the imminent crisis. The characters are something bigger than the sum of their powers. I’ve seen a shadowy, interdimensional operative. I’m getting interested, I’m getting invested, and I’m starting to care. And if you can get your readers to care about the characters and where the story is going, you’re doing something right.

I just need to hound the artist to implement an RSS feed. :)